My name is Beatrice. When I was born, I was blessed with the Sight. I was immediately removed from my parents and enrolled in the Institution. At the age of twelve, I had my first true vision, earning my raven’s wings. And when I turned seventeen, one of my visions came true. Things haven’t been the same since.

The Institution depends on me to keep the City safe from our enemy, the Dreamcatchers, but I’m finding it harder to do while keeping a secret from everyone, including my best friend Gabe. It is a secret that could put us all in danger. A secret that could kill me and everyone close to me.

The Keeper: A Raven Chronicles Novella In this dark and thrilling prequel, in a time before Beatrice, before the all-out war between the Dreamcatchers and the Seers, before the Keeper became the Keeper…there was just Danielle…Yesterday, Danielle was only a Seer, but when the Institution is attacked, Danielle suddenly finds herself wearing the red robes of the Keeper, a role she never expected to serve. As she struggles to come to terms with the brutal facts behind the attack and the demands that her position carries, she learns that leadership doesn’t come without sacrifice. As the danger continues to grow, Danielle must make the choice between the man she loves and those whom she is sworn to protect. But in making the choice, Danielle could make the biggest sacrifice of all. 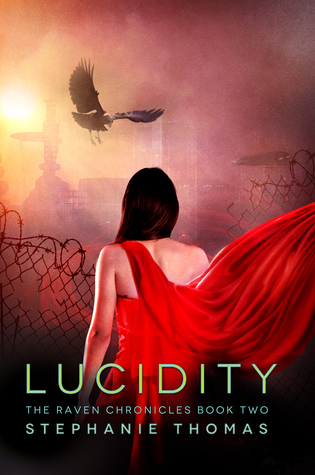 atrice never thought she’d find herself in the middle of Aura, the city of her sworn enemy, the Dreamcatchers. Nor did she never think she’d abandon everything she’d ever known and everyone she’d ever loved to blindly follow Echo, the Dreamcatcher Prince. Gabe would never forgive her, if he lives, and nor will any of the Seers. Upon arriving, Beatrice is quickly thrown into the Dreamcatcher Queen’s self-serving plot to save Aura from a disastrous plague, and Bea’s anticipated return to the City is becoming less likely every day she is held captive and subjected to the epidemic. Her Visions are the key to the cure, but when her Seer friends show up in Aura as well, Beatrice must learn to balance her precarious friendship and loyalty to both her people and the promise she made to help Echo’s people. As Beatrice navigates these new people and customs, she learns that there are more than just the Seers, Dreamcatchers and Citizens left in the world…and whomever is out there wants to eliminate all of their competition — including her. ...this book was like nothing I have read in a while. It was refreshingly different and that is what I loved about it.
Shieka (via Goodreads)
Refreshing and compelling, LUMINOSITY is a must read for fans of the dystopian genre!
Tara Fuller (via Goodreads)
I really enjoyed this book. I've never read anything quite like it, actually.
Step Into Fiction (via Goodreads)
I felt that Luminosity was well paced, and laid a great foundation to go on from. I honestly want to know what is going to happen next.
Heather (via Goodreads)
I HIGHLY recommend this book to YA readers who love Fantasy, dystopian and action-type books. I do believe this will be perfect for you.
Dianne (via Goodreads)
...the story not only lives up to my expectation, but also surprises me with things that I had never anticipated.
Henrietta (via Goodreads)
%d bloggers like this: